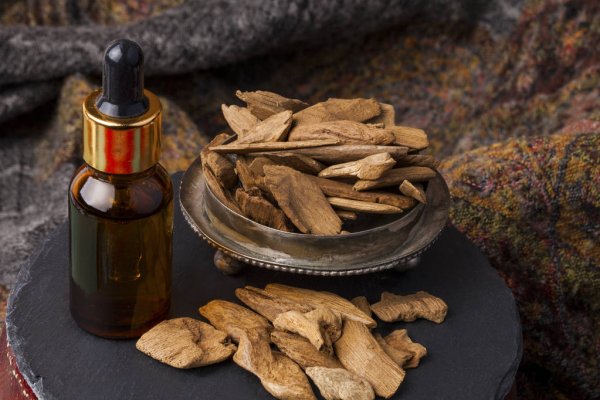 Agarwood has a great commercial worth as a flavoring and therapeutic product. Agarwood is formed naturally from the Aquilaria crassna tree, which may be found in abundance in Vietnam’s old woods.

1. How to create microbial agarwood?

Only a few types of Aquilaria trees can generate Agarwood. Specifically, Agarwood is the result of Aquilaria crassna trees’ self-defense response to external factors such as mechanical damage, fungi, bacteria, plant hormones, and chemicals… When the tree is being injured in a certain area, it will automatically accumulate resin here to bandage the wound, as a self-resistant ability to resist external agents, thereby creating Agarwood.

Mr. Truong Thanh Khoan, an experienced farmer in Dong Nai, was the one who thought outside the box and came up with the revolutionary idea of using ants to make agarwood.

During the process of making agarwood, he discovered an ant species nesting on agarwood trees by mistake. Mr. Khoan noticed that these ants have the ability to manufacture natural agarwood. As a result, Mr. Khoan began researching these ants to tame them and allow them to make a liquid known as ant’s humor. This type of fluid will aid in the production of agarwood on the tree.

Mr. Khoan has successfully cultivated agarwood on tens of thousands of trees and made billions of dollars each year thanks to his hard work and creative method. 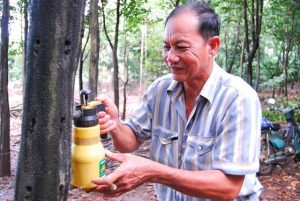 Besides, the discovery of microbial agarwood from ant’s humor contributes a great significance in the manufacture of quality agarwood preparations.

Scientists estimate that there are over 10,000 kinds of ants on the planet. They can be found throughout the world, particularly in tropical and subtropical rainforests.

The tectonic shift of agarwood is thought to have been caused by one of 49 species of leafcutter ants. Some worker ants travel in search of a leaf source and cut the leaves, which they then shred and deliver to the colony. They are broken up and mixed with ant secretions, which frequently contain enzymes, at the nest.

Adding bacteria that ordinarily live in symbiosis with ants, then having the worker ants transfer the previously-stored mycelium, the fungus grows up to form a mushroom garden, which contains the Gongylidia after a period. Glucose, glycogen, glycan, mannitol, lipids, enzymes, and free amino acids are commonly found in gingylidia.

In addition to ant humor, probiotics from ants are also added nutrients and growth regulators for plants, reducing the risk of tree death. This type of transplant medicine, after being infused into the tree, can form agarwood for about 1 year.

Mr. Khoan’s initiative a few years ago created the premise for the development of safe and effective clean microbial agarwood, in harmony with nature.