Back in time with Vietnamese Agarwood history

Since ancient times, the robust formation and development of agarwood have been intertwined with the history of Vietnam. Nowadays, the price of this plant has continuously risen to several tens of billions of dong for each transaction. Agarwood has been lauded as a panacea for kings in the past and now. But has anyone ever thought about it? When did it become popular? How did our ancestors use it in the past? So, to find the origin of agarwood, let’s back in time with Vietnamese agarwood history.

“Agarwood is the junction of the spirits of heaven and earth,” wrote by Le Quy Don in his book “Phu Bien Tap Luc.” Alternatively, it is stated in the court books of the Nguyen Dynasty that agarwood has more than 170 distinct fragrances. Each wave of incense release is a different aroma, complex flavor, and has its own prominent smell for each time you smoke incense for 24 hours in a row.

Therefore, agarwood has always been honored and given special love in the lyrics and poetry of Vietnamese people from ancient times.

1.1 During the period of domination by northern invaders

In the 200s BC, agarwood was a valuable product that the people of our country paid tribute to the North. Since then, agarwood has become an important product for trade to Mongolia, India, and Egypt along the Silk Road.

1.2 During the period of monarchy

According to history, agarwood was a valuable medicine and a remedy for many diseases: circulatory, pulmonary, physiological, and digestive for the royal lineage during the reign of Thuc Phan An Duong Vuong. King Dinh Tien Hoang later used this incense boxes to preserve dragon robes to keep them smelling fresh.

1.3 During the feudal period

The incense was incubated in the jade tunics of feudal nobles, which were woven with velvet brocade and meticulously stored in brocade boxes. Then there’s flaunting the perfume of money, celebrity, and nobility that only the upper crust of society is allowed to wear. 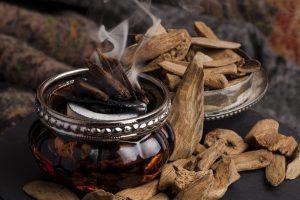 2. The peak of Agarwood in the Nguyen Dynasty

The Nguyen kings boosted agarwood exploitation and trade with foreign countries during their reign. Lord Nguyen used to have a monopoly on the market. For example, they bought  in the US for 30 taels/kg and sold it in Japan for 30-40 times more. Thanks to their skilled trading, The Nguyen kings had built an empire of agarwood successfully.

Our country’s agarwood riches were also well-protected by the kings’ domestic and foreign diplomatic policies. The Nguyen Dynasty only allowed agarwood to be harvested once a year, and only from wilted trees. Planter absolutely do not exploit the young, still green, thereby ensuring not to destroy or over-exploit the country’s resources.

After 1975, the demand for agarwood has increased sharply, leading to more and more illegal exploitation. Any age of Aquilaria crassna is exploited, causing forests to lose their ability to rebound over time. The woodlands increasingly narrowed, forcing agarwood to search deeper into the forest , increasing the danger of the expedition.

The Vietnamese government issued Decree 18/HDBT on January 17, 1992, declaring the Aquilaria crassna a wild tree on the verge of extinction and subject to unlawful exploitation and use.

Agarwood is valued not only because of its origin and rarity, but also because of the efforts made by  cultivators to obtain it. Furthermore, for thousands of years, the plant has been intertwined with the flow of Vietnamese history and national culture. It does not only possess tangible but also intangible cultural, historical, religious, and religious beliefs. Agarwood is the most revered and sacred scent in Vietnam.